Will we ever find out if and how Truxton Spangler takes his own life as the four-leaf clover bodes?  We are pretty sure Katherine Rhumer won’t be back unless the supposedly lethal  injection was more like what the airplane passengers got on The Event (FYI – they came back to life.)  Is Tanya really going to quit and write another book?  Will Miles have a  nervous breakdown and then live happily ever after with the new chick who speaks Urdu?

I was not surprised at all that Will’s new artsy lover (with the fabulous shower curtain) was really undercover protecting him, but who hired her?  Arliss?  So many unknowns..but what would happen next season?  Will Will (ha ha “will will”) keep trying to take down Atlas McDowell?  Will he find happiness so he can have more than just that one perplexed expression on his face?

I was not as impressed with the Rubicon finale as I was with the Mad Men finale, but I am definitely up for another season.   I am too tired from fighting with PowerPoint all day to elaborate more or make a great case for James Badge Dale and his crew but my friend Maureen Ryan at TV Squad (she is not really my friend) wrote this great article called “Six Reasons to Save Rubicon”…read it and support the cause.  (This article has been archived from the interwebs but you can find Maureen Ryan, former TV critic here) 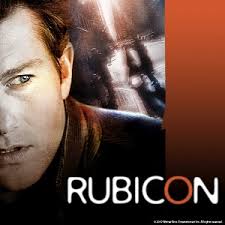 I read a review on TV Squad today that made me look at Rubicon with new eyes.  The review called Rubicon the “Addictive Anti-24” and the essence of it was that, unlike 24, Rubicon focuses on how the intelligence world impacts the people in it.  On 24, things move fast, and there is not a lot of time spent on how the characters feel about it all.   Rubicon moves slower (sure does!) but really focuses on the characters and what their world does to them as people.  When I read that, it was like a light bulb went off and I could not wait to watch the next episode.

Hard to say how I would have felt if I had not read that review, but who cares, loved this week’s episode. I am worried that the discovery of the “hydra” made Ed Bancroft crazy and could tell that James Badge Dale (Will) was worried too!  (He is such a good guy. And not like vampire Damon good, like REALLY good.)  I am annoyed that Kale ratted out Maggie but believe he did it with the best of intentions and I am pretty sure after seeing the preview for next week that Will forgives her, big time.  I do hope that confusing intelligence project they were working on is over, because I was not in to that, but I definitely want to know what is going on at Atlas McDowell!!  How creepy is that corporate dude/bad friend to Katherine Rhumer.  He deserves to be spied on.  (Although I would love my own executive bathroom).   So glad Tanya is not fired.  Maybe Spangler is not the devil?  Or maybe it is too much of a security leak to ever fire people.

Last week, I was annoyed by the pace and all I could think about was “why does he keep picking up that owl?”  This week, when he was checking out the bug in his apartment (which I noted looks like a mini walkie talkie and thought that was cute) I was thinking, “that is what I would do.  I would not be able to stop thinking about the bug in the owl.  I would think about removing it but would be scared, so I would probably keep opening up the owl to just look at the bug.”  I think this week, he felt so empowered by having the  “phone list” that he finally had the balls to squash one of the bugs.  That was awesome.  Makes me want to go back and buy the owl necklace I saw this weekend that reminded me of Rubicon.

One more thing that the TV Squad review mentioned was that James Badge Dale was on season 3 of 24.  Could not place him.   I IMDBed it.  He played Chase Edmunds, Jack’s partner who was secretly dating Jack’s daughter Kim.  I thought he looked familiar, but there was no way I would place him because his hair is way more bushy now. (This is JBD as Chase Edmunds on the left)

Link to the TV Squad review: ‘Rubicon’ Is the Addictive Anti-’24’:  http://bit.ly/cALMMe

I don’t have Showtime.   It’s kind of like an alcoholic not keeping alcohol in the house.  Yes, I have cable, and a TiVo, and HBO so I guess that is like an alcoholic having beer in the house and not hard alcohol, but it’s a start.  I digress.  Because I don’t have Showtime, I am just now catching up on Dexter: Season 4.  I know what happens at the end of the season.  (A spoiler like that can’t be kept this long from someone who reads EW and TV Squad blogs religiously.)  So I am finally digging in to what I have heard, is the best season yet.

My thoughts so far (through episode 5 where Trinity kills the “older man” who used to be a kid on Little House on the Prairie.)  Love the relationship between Laguerta and Batista.  Yea, there are a lot of office romances at Miami Metro but  I hope this one lasts and neither of them die.  I like them both.  I was totally thinking anyone who chose Lundy over Anton deserved to get shot, until Debra had that amazing scene where she completely lost in the parking lot and I was in tears.  I felt so bad for her.   That was the one time I was reminded that they are really married, not brother and sister, because I was thinking his character is socially inept and of course would not rush to hug her but as her husband, it must have been so hard not too..eventually he did, thank god.  That scene was amazing.  I am wondering if Deb will move in with the kill tools and blood samples or if  Dexter will give up  his apartment.  Trinity is super creepy.  I had a dream about him and it was creepy.  I hope that doesn’t happen again.  And I am glad Dexter seems to finally be getting more sleep.  That was exhausting to watch.

My plan is to finish the season next weekend.  I will let you know what I think.  Off to watch the Emmy’s…