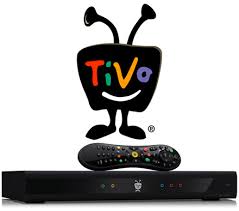 The problem was the TiVo. (See addendum below)

I have been surviving on non-HD channels since March. It’s been tough, but I have been hanging in.   A couple of weeks ago, my TiVo started just turning itself off in the middle of the night.  No HD involved. I could no longer blame the Time Warner signal.  One phone call and $99 later, a new TiVo Premiere was on the way.

The transition was MUCH smoother than expected. Just this month Time Warner started letting people install their own cableCARDS (no more visits from the cable guy!) All I had to do was move the card from one TiVo to the other and call Time Warner to change the host ID to the new box.

TiVo has a super cool feature that allows you to copy your Season Passes from one box to another, so within 5 minutes, my season passes were all set up on my new box.  Woo Hoo!

I now have a really sweet set up with both TiVos connected to my TV so I can keep my Inhale with Steve Ross yoga shows on the old TiVo and play them whenever I want, as long as the TiVo limps along (you were worried weren’t you!).  I can also move shows to my old TiVo if I run out of space on my new TiVo.  It’s all good.

After about 20 minutes (which would have taken me 10 if I had not had a glass of wine before I embarked on the task) I had my TiVo remote set up to control each TiVo individually using my DVR 1-2 switch.

In addition this extremely productive activity which has restored my high quality television watching, I bought two dresses for upcoming weddings and took a very long walk on a beautiful NY day. Stay-cation day 2 was a success!

Addendum: It was later revealed that the issue was REALLY the extended hard drive attached to my OLD Tivo.  When I decide to finally retired my old TiVo (with the Steve Ross Inhale shows) move my old DVR extender to my new TiVo Premiere, it started freezing up.  I ordered a new extended hard drive, and all was well. Diagnostics on the drive were fine, but the drive was shot.