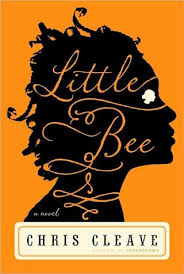 I read an entire book this week.  It was a small book, only 288 pages, but I feel a sense of accomplishment.  I am retaining my (failed) goal from last year to read at least one book/month in 2011 and so far so good!

The book was Little Bee by Chris Cleve.  It came highly recommended by several women I traveled to Sicily with, so I was sadly disappointed when I did not completely love it.  Let me re-state. I LOVED the first 75% of it, but the last 25% was bad.  The dialogue went down hill, the characters started doing silly things, and the end was….a huge let down.

The book is about a 16 year old Nigerian girl and a well-to-do British couple who’s lives become intertwined due to a tragic event that alters all of their lives forever (of course).  The book alternates from being from told from the point of view of the 16 year old girl, Little Bee, and the wife of the British couple.

The perspective of Little Bee is well written (in a poetic voice that takes a few pages to get used to but  grows on you) and I loved the way he illustrated Little Bee’s perspective of England as a girl who grew up in a primitive Nigerian village but spent two years learning “the Queens English” in an immigration detention center.  There was great suspense and plot twists right up until 3/4 of the way through and then it just got weird.   One character entered the story that was completely unbelievable and the story just fell apart when lots of tings that made no sense started happening.  I can’t say more without giving it away, although I can’t imagine you would read it after my glowing review.

I also went to see The King’s Speech.  This is a movie I can recommend highly with no reservation.  Loved it.   True story (so I got a nice history lesson) about King George IV who was originally Prince Albert but took the name George when he became King (Albert was, apparently, not considered a cool King’s name.)   Prince Albert had a stammer (which I just learned from Wikipedia is a synonym for stuttering although Albert had more of a hesitation than what you would more commonly think of as a stutter) and he worked to overcome it with a speech therapist from Australia.  The movie is about the process of him overcoming this speech impediment and the friendship he develops with his speech therapist.  It is heartwarming and funny and deep and just a great flick.  Colin Firth is awesome, as always.  I also saw him recently in A Single Man, which I also really liked and he was also fabulous in that.  And he was of course in one of my favorite movies of all time, Love Actually.  I think he should be the King of England.  He rocks.