Once Upon a Time in Wonderland is only one week out the gate and TV by the Numbers already has it on the cancellation bubble! If you like Once Upon a Time, you will like this show (I actually think this one is better.) The question is, how many hours of fantasy, fairy tale drama TV can a person watch? Sunday night feels like the right night to watch something Disney-ish (because, as I have mentioned before, The Wonderful World of Disney used to be on Sunday nights.)  Thursday night is more like a Vampire Diaries, Grey’s Anatomy, Scandal kind of night (in my TV world.)  People are getting ready for the weekend and want to watch drama and scandal and pretend their weekend will be full of the same. (None of this applies to me of course, because I record everything and watch it when I feel like it, but apparently, lots of people still watch things real time!)

That being said, I liked it. The story is told by bouncing around from present day to past (different times in the past, even) so you have to stay on your toes to follow the story. I like some intellectual challenge in my TV. What is the story? Let me tell you..(spoiler alert)

The whole things starts AFTER Alice’s adventures in Wonderland. When she returned from Wonderland, she had apparently been gone for a long time (not just like a nap) so everyone thought she was dead. No one believed her story so they institutionalized her. At some point (we don’t know the details exactly), as a young woman Alice escaped and went back to Wonderland to get proof that it exists. On this return journey, she fell in love with a genie. The genie was supposedly killed by the evil Red Queen (we don’t really know why) and Alice was devastated. When she returned to the “real world” from Wonderland, she was despondent. She told her doctors she did make it all up and then she agreed to electroshock therapy to forget everything (we are now in the present day that is not really the present day, because they still do electroshock therapy. Its a vague time period.)

BUT..before she goes in for the procedure, the Knave of Hearts and the White Rabbit (remember that people and animals can travel between worlds) tell her that her genie love (Cyrus) is alive and that she should go back to Wonderland to find him. BUT..when she gets there, we learn that the evil Red Queen made up the whole story of Cyrus being alive to get her back to Wonderland. BUT…then we learn that Cyrus really IS still alive and being held prisoner by the evil genie Jafar (we don’t know why) who is working with the Red Queen (at the moment. He also wants to kill her.) 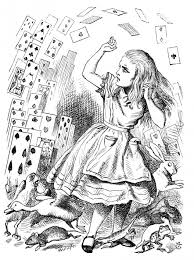 So there you have it. Many mysteries to unravel and a romantic quest to find lost love in a fantasy land where there are lots of mushrooms and things can grow big and be made small. The dialog is actually smart and witty and the visuals are appealing. And Alice kicks ass, literally, with swords and karate moves.

Watching this show made me give some thought to what is is about Alice in Wonderland that appealed to me as a small child. I think it was because Alice was brave and curious and spoke her mind. She made her way, on her own, through this strange land and she wasn’t scared, she just rolled with it. She was nice to those who were nice to her but didn’t put up with any shit. She did get upset once and cry a river of tears, but she pulled herself together and got out of her predicament. No one came to save her, she just figured it out. She was smart.