I finally finished the entire series if Battlestar Galactica. It was awesome. Possibly my biggest accomplishment of 2013, so far. (Let’s do hope I can top that, though) For those of you who know nothing about Battlestar Galactica, let me tell you a little bit about it.

Humans invented a race of machines that got pissed and revolted against the humans. When the series starts, the machines (Cylons) have destroyed the human’s planets (The Twelve Colonies) and all that is left of humanity is flying around in space ships.  I think they survived because they were in space when their planets were destroyed. (Did I mention this is in the future?) The Battlestar Galactica is the only military ship of the fleet so it is the “star” of the series and where most of the action takes place. Edward James Olmos (Stand and Deliver) is the commander of Galactica and he rocks.

So these people are flying around space, at war with the Cylons, sometimes at war with themselves.  They establish a government with a president (Laura Roslin who also rocks) and they have all kinds of adventures. 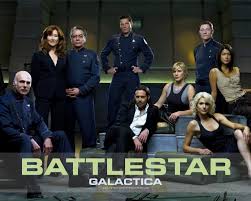 What makes it so awesome? Well, the whole Cylon thing is pretty cool. They evolved themselves in to race that looks exactly like humans. There are 13 models with multiple copies of each model.  The models can resurrect themselves (in these gross bathtubs on on resurrection ships) when they die. As you can imagine, this makes things pretty interesting. Throughout the series these 13 models are revealed. At the end of season four you are really shocked when you find out who four of the “final five” are. (I won’t give it away but it is huge!).  The “final five” are this huge secret until the last season. They invented the other “humanoid” Cylons but no one will ever talk about them. It gets crazy, trust me. 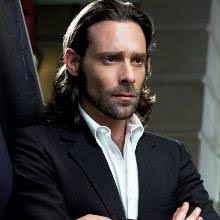 The humans are some pretty cool characters too.  I like outer space, in general, for some reason, but I like it more with interesting characters.  There are very strong female characters like Starbuck, a crazy dare devil pilot who drinks a lot and has a lot of sex and breaks a lot of men’s hearts. She is also supposed to lead humanity to its end (which is still confusing to me, because humanity survives – sorry for the spoiler.) She kicks ass and is not afraid of anything, except intimacy. (Who isn’t? Intimacy is pretty scary.)  Gaius Baltar is my favorite. Kind of an ass (no really an ass) but he is hilarious and smart (and kinda hot) and does get to be less of an ass over time. He “sees” one of the Cylons as if he were schizophrenic and you don’t really know why until the very end.  Let’s just say it has something to do with the religious undercurrent of the series.

By the end, Cylons and humans are falling in love with each other and having babies while they fight amongst themselves and with each other. They have crazy shared dreams, disappear for months and come back from the dead. Some find out they are machines when they had NO idea their whole lives. They find Earth, get really sad, and then find Earth again.  I am telling you, it gets really crazy.

Check it out. It’s good stuff.