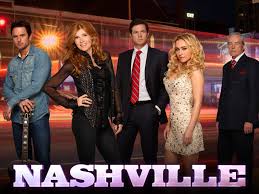 I really want to like Nashville, but so far, I don’t.

I am not loving Connie Britton in this role. I just see Tammy Taylor pretending to be a country star. I believed her as the wife of a philandering psychiatrist living in a haunted house in American Horror Story. I can’t figure out what the problem is here. The writing? The acting? I am just not digging her in this.

Hayden Panettiere, is rocking it, though. She is cute and nasty at the same time and totally believable. She is a great TV villain, and a great singer!  Who knew?

I love the music. I do like my country pop and I am a sucker for the TV musical. I am pretty much over Glee so I might rank this above Glee right now, but below Smash. There is definitely a soap opera quality to the show. Lots of drama between Connie and her father and her husband and her ex and Hayden and Connie’s ex and the young songwriters who work at “The Bluebird” (where they all get to belt out tunes every week.)

Lot’s of attempted drama, I should say. Not successfully pulled off. The drama needs to be either over the top and camp, like Smash, or feel more genuine and real, like The Good Wife or Parenthood. Can you imagine The Good Wife as a musical? That would be hard to pull off. I guess a good TV musical is a tough formula. Can there be a non-camp TV musical?  I am racking my brain to think of one. There have been musical episodes (all camp..Buffy the Vampire Slayer, Ally McBeal), but the TV musical series is a new phenom.

The ratings are so-so for Nashville but the critics love it. They apparently think it is well written and that Connie Britton is superb, so maybe I am missing something. I will give it a few more episodes, at least for the tunes.