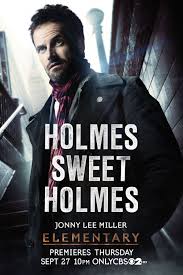 Elementary has an interesting premise. Sherlock Holmes (Johnny Lee Miller) has just escaped from rehab (on the day of his release because he was bored). Lucy Liu (Joan Watson) is hired by Sherlock’s father to be his “sober companion” for six weeks.  His father has made this companion thing a condition to letting his son live rent free in the Brooklyn apartment he owns.

Sherlock enjoys solving crimes as a “consultant” to the police (so he answers to no one but himself) and has teamed up with a New York cop that he crossed paths with in Scotland Yard before rehab. Watson gets sucked in to helping him with it since she has to stay by his side, but she kind of likes it.

Sherlock is keenly observant, pretty much exactly like The Mentalist.  The difference is that he has a British accent and tattoos. Now that I think about it, this show is The Mentalist, but slightly darker. Holmes and Watson have a similar relationship to Jane and Lisbon.  So net net, I guess the premise is not all that unique.  Same show set in NYC. I don’t know if Holmes will have a nemesis like Red John, though. That might make it more interesting.  The Red John story is what I like best about The Mentalist. (Oh and Patrick Jane is kind of hot.)

How many crime solving shows can there be? Are people really not bored with smart crime solvers uncovering tricky clues that lead to an unexpected outcome? Are there really that many unexpected outcomes? If you are looking for another procedural to add to your life, this one might not be so bad. I might pop in on it once in a while, but smart crime solvers don’t generally do it for me, unless the crimes are of the supernatural nature, of course (aka. Haven or Fringe.)