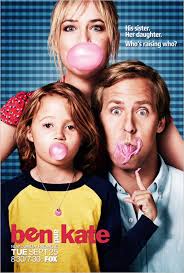 Ben & Kate is funny. I laughed out loud. At first, I thought, “Who is this guy with weird teeth, he can’t be the start of this show?” And the first few minutes were not super hilarious. Then the adorable girl from We Bought A Zoo appeared.  She is so cute and I LOVED We Bought A Zoo, so I kept watching.

When Ben went to stalk his ex-girlfriend with “the cute one from We Bought A Zoo”, it started to make me laugh. In the next scene Ben and his friend are brainstorming how to crash her wedding in hilarious masks, just because, it’s funny.

The humor is quirky. The characters are funny, especially Ben. Kate (Dakota Johnson – daughter of Don and Melanie) is a little odd.  She mostly has a deadpan face with little expression, but she is a good straight man to Ben. She grew on me by the end of the episode.

The only time when I was not chuckling, was when Kate said, “What a woman is most afraid of is that she will never find that one person who accepts her for who she is and that if she does and finally starts to let him in that he is going to leave”. I got a little vaklempt at that point.  I was not quite sure how it fit in to the episode, but it is kind of the story of my life recently, so I kept watching through eye mist.  The most hilarious scene followed involving lipstick, the super funny British lady, and the “cute one from We Bought A Zoo.” Then I was laughing again.

This one gets a thumbs up.  I think it fits right in with New Girl, another quirky show that I find hilarious.  If you still don’t like New Girl, then (a) you are crazy and (b) you might not like Ben & Kate.