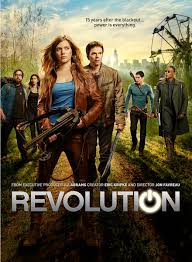 I checked out Revolution and it was…..bad.  The acting, the plot, the dramatic music that played at ridiculous times….it was all bad.

The show opens with kids watching TV and playing with an IPad while their mother explains their grandmother that they are too zoned out to come to the phone but they are “cutting back” on technology.  In the next minute, a man enters  in a panic telling his wife to fill the tub because they need more water and  don’t have much time.  She says “It’s happening, isn’t it?”  Then he calls his brother who is driving on a highway (with his cute friend who is using technology to text) and tells him, “it’s all going to turn off an never turn back on” and then they get cut off.  What’s happening, is that that all of the power in the world is about to be turned off.  Not just things that run on electricity, but also on batteries and fuel (which makes no sense.) Clearly the point was to build mystery quickly, but the implementation was horrible.

Did Flash Forward make sense?  In this fabulous show, everyone on the planet blacked out for a few minutes and all saw clues to their future at the same point in time. This makes no sense, but is was well done and I was in to it. I almost believe every one of those Fringe events. Why couldn’t their be an alternate universe with another version of myself that I can travel back and forth to through a portal? Walter, Peter, and Olivia, make me believe it!

I can clearly suspend belief, but when I saw all of the cars stop on the road as their lights went out and they all went dead, I thought, “even if a crazy virus turns people in to Zombies that want to eat the live people, the cars still work.”

From the opening 5 minutes we then move ahead to the same family 15 years in the future. Things just continue on with a ridiculous plot that moves too fast and is too obvious. A bad guy comes for the Dad (the mother is already dead, supposedly), the son tries to stop it and gets kidnapped and bad acting Dad gets killed. The sad orphaned daughter (the star of the show) heads across the country to find the uncle (from the car) to help her get the brother.  The only thing she knows about the uncle is that “he is good at killing people”, which (surprise) we see later in the episode. By now, however, I don’t care.

There is this key piece of the mystery which is a jump drive that the man downloads information to, just before the power goes out. (There it is to the left!) Later in the show he hands it to someone for safe keeping before he gets killed. Occasionally it gets pulled out just so the guy can look at it and every time they show it, cheesy dramatic music plays.

Clearly this show was made for people who don’t pick up on things quickly.  It is too obvious and in your face. I like shows that are so smart, I miss half of the subtle features and have to read a blog to get more insights. This show is ridiculous.

The one good part of the show is Giancarlo Esposito (aka Gus from Breaking Bad.)  In this show, he plays a REALLY bad guy, not a bad guy disguised as a calm business man. He is mean and REALLY good at it.  His acting is awesome. Sadly, this is not enough to make me watch the show.

What is going on with JJ Abrams? Felicity, awesome. Lost, awesome. Alias, awesome. I also really liked What About Brian and Six Degrees that he executive produced (thank you IMBD for reminding me!) In 2010-2011 he created Undercovers.  Remember it? Of course, not it was horrible, but it might have been better than this…

I am trying to stick with you dude, but thumbs down for Revolution.