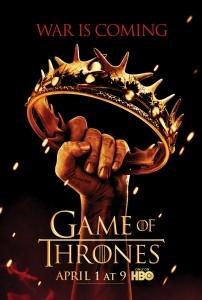 Seriously, how awesome is Game of Thrones? When a show is amazing, like this one, I am fully engrossed for the whole hour, no distractions or multitasking. (This almost never happens, even to a TVaholic.) The show just feels full and textured, thicker than other shows.  Maybe it is the costumes or that most of the characters are always covered in dirt. Apparently the show has really caught on because the Season 2 premiere was up 77% from Season 1.

I could  on, but I still haven’t caught up on Mad Men yet!!