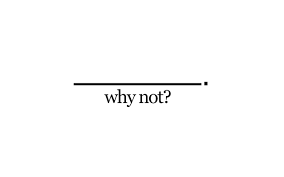 A couple of weeks ago, I saw the movie We Bought a Zoo. I liked it. It was heartwarming, made me laugh, made me cry, and had a nice happy ending.  My key takeaway from the movie was “Why Not?”.  Matt Damon’s brother asked him why he was going to buy a zoo, and he said “Why Not?”.  At the very end of the movie (and sorry to give this away but it was really wasn’t the most awesome ending) Matt Damon was telling his kids about when he met their mother (who passed away..super sad).  He said “Why would an amazing beautiful woman talk to someone like me?” and she said “Why Not?”.  Kind of tied it all together in cheesy way.

Why not do this totally crazy thing that might change you life for the better?  Why not open yourself up to something or someone new? Sounds great, right?

I had grand plans of writing this post about being more open in 2012 with some positive play by play of this meetup I was planning to attend on Friday night to back it up. The meetup consisted of total strangers meeting at a museum bar and then touring the museum together. The new me in 2012.  I was going to head out and meet new people. Why Not?

Here’s what really happened. I procrastinated at work until I thought it was probably too late to go.  Then I decided I would not go, but felt like crap about that decision so I reversed it and headed over one hour late.  I showed up and realized I could check out the situation without anyone knowing I was there for the meetup. I looked around (like I was looking for a friend) and decided that no one looked interesting (how the heck can you decide if anyone is interesting by looking at them…you can’t). I also decided that it looked like to much of a pain the ass and I was too tired so I left.  Woo hoo!  2012 is off to a great start.

Why not attend random events where you can meet new people? Because for me, it is often tortuous and stressful.  However, as a result of bailing, I spent the rest of the weekend feeling bummed out and like a total failure.  Also torturous and stressful.

The only way to change your life is to do something differently, but change is REALLY hard. Making excuses is so easy.

Do not fear!  I am not giving up! In 2012, I am committed to being more open and fighting these annoying “fears” that keep me closed off from really cool stuff I am missing out on in the world. It will not be easy, and not every post will be “glass half full”, but I will keep trying. If slow and steady wins the race, I am right on track!