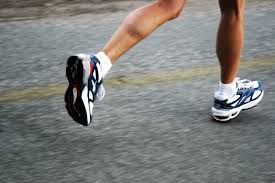 I have never been a huge exerciser.  I didn’t grow up in a sporty family.  I recall my parents jogging a bit from time time but the closest I got to exercise as a teenager was cheerleading, and my main focus was really the football players.

As an adult, I have mostly done the bare minimum to stay healthy but occasionally, I am inspired to do more. On more than one occasion, the inspiration was a cute guy at the gym.

I have run a few races with my college friends but they involve a lot of things I don’t enjoy (exercising in the morning, exercising on a schedule, running in the cold, uncertainty about restroom availability, crowds, and travel). I had checked “run a 5K, 8K, and 10K” off my list off and was not planning to revisit these activities.

My sister asked me to run an 8K with her a while back.  She caught me on a day where I was so annoyed with work, that the idea of doing anything BUT work sounded very appealing. She was completely shocked when I said yes, and I believe she asked me again to be sure she read my response correctly.

I rallied and trained so I could do my best to keep up with her on the course. The night before, I jokingly (but not really) suggested that we could just run around the neighborhood instead at a more godly hour when it had warmed up a bit, but my sister would have none of that. She has her own list of things she does not enjoy, but they are not the same as my things so I couldn’t talk her out of  it. She had barely run in months, but she was in and taking me with her!

We ran the race this weekend and I was reminded of the benefits of powering through all of the things I don’t enjoy about races:

Although I did get back out and run today and was happy to be reunited with the endorphins (I might be addicted), I did decline the proposal to run ANOTHER 5 mile race two days from now.  Two races in one week could potentially negate some of the positives listed above.  I think I will bask in the glow of this accomplishment for while before committing to another one.