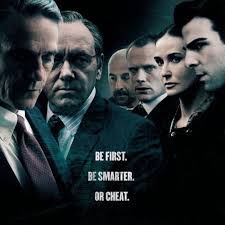 I saw Margin Call last night.  LOVED it.  Kind of like the way I felt about Jane Eyre, which is weird, because they are completely different movies.

Margin Call is a fictional take on what could have happened the 24 hours before the downward spiral of the financial world a few years back.  I tried to watch Too Big To Fail, but it didn’t keep my interest.  I had that documentary about the financial crisis for a like a month (back when I had Netflix, sigh. I miss it.)  Never watched it.

This movie was different. It was suspenseful, even though you pretty much knew what was going to happen, you didn’t know what the characters would decide to do or how they would react. (I didn’t anyway).  It moved at exactly the right pace (MG, who I saw it with, thought it dragged a bit.  I thought it could have kept going).  They broke down the issue of over-leveraging mortgage back securities several times and explained it so clearly that even a Golden Retriever could understand (that’s from a line in the movie.  I don’t normally incorporate dogs in to anything). It was extremely well acted by peeps like Kevin Spacey, Stanley Tucci , Jeremy Irons, Demi Moore – who looked refreshingly real and not airbrushed, Sylar from Heroes – who coincidentally came out of the closet the week before the movie opened, Dan from Gossip Girl, and The Mentalist.

It’s always about the characters for me (and I like my suspense, so it was cool that this had both). The super smart young kid who just wants to work with numbers and likes the money but likes the intellectual challenge more. The superficial kid who just cares about the money and prestige. The CEO who makes the decision that will bring down the markets and betray his customers to save his own skin even though he has more money than god. The guy who’s dog dies the morning before this all happens and is the most torn up about it all, but goes along anyway. The guy who figured out it was all going to pot, but got fired right before he could solve the last piece of the puzzle.  This guy, they talk in to coming back to the office (so he won’t spill the beans while they spend the day selling worthless assets)  by offering him a ridiculous amount of money.  You actually think he might not cave, but he does. (spoiler alert…too late.)

They literally kept handing out tons of cash to people to get them to go along with this plan.  It was madness.  This movie is really like an anthem to the “Occupy Wall Street” movement.  I do wonder how many people standing out there in the freezing cold rain today, would really turn down the opportunity to make that much money.  I won’t go there.  I’m not that kind of blogger. 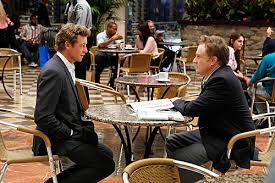 Speaking of The Mentalist (because I am that kind of blogger). I have been watching quite a bit of it lately. I checked out the first episode of this season and was completely confused so I went back to catch up on last season, which I had conveniently saved on my old Tivo.  It got really awesome at the end of last season.  OMG!  The guy from West Wing (otherwise known as Bradley Whitford) was sort of kind of Red John for a minute (turns out he wasn’t thank god, so the show can go on).  That scene in the mall where they meet face to face, was awesome.  Kind of ridiculous that Jane got off scott free for murder, but this is high level mediocre drama we are talking about here.  In all fairness, since I am really watching it, the show needs to get bumped back up to the top 10.  Luckily Whitney is wearing on me so I can make room.