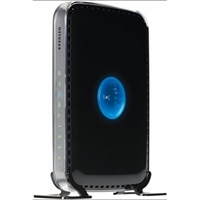 You know what’s awesome?  Having consistent, reliable wireless internet access.  For the past five years, the wireless signal from my home router would drop after two hours and I would have to reboot the thing to get a signal.  As a result, I barely used it.  Then, last week, it started dropping the hard wired connection.  Something had to be done.

I did absolutely no research, went to Best Buy, and with no help (because they have the worst customer service on the planet) I selected an $80 Netgear router.

It looks kind of like a space ship, which is cool.  It also has two channels, I think.  I’m not sure why I would need two channels.  Probably meant for a household with more than one person in it.  I may have over purchased but I wanted to be absolutely sure that it would work.  And it does.  My IPad loves it.

You know what else is awesome?  Paying half as much for a land line and getting an email when you have a voice mail message. I randomly decided to switch to Vonage a couple of weeks ago after seeing their commercial a few times (TV advertising still works!) So far, so good.  I have not actually spoken on the phone since I got it, but I have gotten a couple of voicemails about extending my credit and a pocket dial.

I have a little box that translates the internet signal in to a phone signal.  Somehow, the internet can even tell my phone when I have a voicemail and the little light starts to blink on my phone.  That seems kind of magical to me since the voicemail is out on the internet and my phone is here in my apartment.  I have to admit that I was not quite sure at first how to get that voicemail off the internet, I was pretty sure I could go to the web site to get it but was not sure if I could call a number to get it (which I think I can) but then I noticed the “wave” file was attached to the email.  Awesome, it was delivered right to me! Technology is amazing.