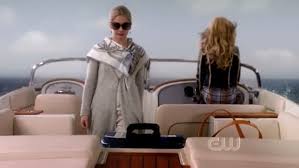 Ringer is by far the worst show I have ever seen. I almost didn’t finish the pilot. It was painful.

The premise is that one twin pretends to be the other twin because twin #1 (prostitute/drug addict) is in danger and thinks her sister (a super rich bitch) committed suicide while they were out together on a boat so she is hiding out pretending to be her (twin #1 fell asleep and when she woke up, super rich twin was gone with only her very expensive engagement and wedding ring left behind in an empty prescription pill bottle.) Ridiculous.

This boat scene reminded me of the Muppet Show for some reason. I must have seen some Muppet with huge sunglasses and a scarf in a completely fake boat at some time in my life that I can’t quite place. Probably a better image to help you get it would be an old movie from the 50s where they never REALLY filmed in any water and everyone knew it. The boats were obviously fake and the bouncing up and down on fake waves was fake. In the 50s, this was fine. In 2011, this ridiculous.

Another silly scene had the two twins talking to each other while looking at themselves in those mirrors where you see yourself over and over indefinitely. Clearly intended to be an artistic way of having Sarah Michelle Gellar in a scene with herself. It was weird. The poorly written dialog didn’t help.

I just checked out a few reviews and the critics are not being as harsh as I am, which I find perplexing. They find it akin to a “charming B-Movie” but bordering on camp.

It does have a pretty good cast. Buffy, herself, of course. “Blossom” plays the rich twin’s BFF (and she looks great. She has grown in to her nose or had it adjusted well.) The guy with the amazing eye lashes from Lost is some kind of law enforcement guy looking for the twin in trouble. The endearing and adorable dad from Life Unexpected is Blossom’s husband that the rich twin BFF is having an affair with.

I decided to finish the pilot while I was writing…the twin in trouble pretending to be the rich twin just found out that the rich twin is pregnant. I wonder how she will pull that off? And, shocker…rich bitch twin #1 is alive and well in Paris.

I doubt it is worth one more hour of my time…but I am a little curious.