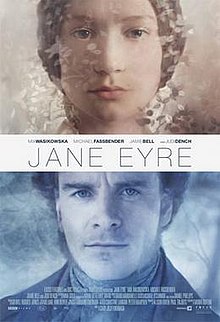 My second to last Netflix movie was Jane Eyre (2011).  I loved this movie.

How have I lived my whole life and not known this classic story? Wikipedia tells me that there was a 1996 movie version which I may have seen.  If I did, I clearly did not love it since it has been stripped from my memory. I think I would remember reading a super long novel from the 1800s but who knows.

This movie version stars Mia Wasikowska (amazing in In Treatment season 1, Alice in the recent Alice in Wonderland, and the daughter in The Kids are Alright) and Dame Judi Dench (and other people I don’t know, like this British due to the right).

The movie starts out as a mystery (the whole story is a mystery to me of course, or I just don’t remember it).  Jane is running from something but you have no idea what it is.  You see flashbacks to her horrible childhood in the 1830’s where everyone around her is evil and treats her horribly and as a result she grows in to a highly moral woman.  She is also smart and independent, but feels trapped since women of her time have few choices (and she has no cash).

Jane leaves her horrible school where her horrible aunt left her and becomes the governess for a young girl who is in the care of a man named Mr. Rochester (who may or may not be the girls father which does not seem to be relevant to the story).  Mr. Rochester is a mysterious, handsome, and sometimes grumpy man.  Jane and he fall in love.  Mr. Rochester rejects a boring trivial rich woman for Jane the governess because he loves Jane’s soul (how awesome is that?)  Something does seem off with Mr. Rochester though (more mystery).  You find out what it is (I won’t ruin it for the three people who don’t know this story) and it makes the man more awesome in my eyes, but to Jane, is was an untruth and just enough of “not right” that she can not stay with him.

It’s horrible and heart wrenching for both of them.  So sad.

Jane runs away in tears and wanders aimlessly in the rain and cold and eventually ends up being taken in by a family of religious people who take care of her and give her a job.  The brother of the clan (named St. John and a preacher of some kind)   wants her to go to Africa with him and insists that she be his wife.  She agrees to go but refuses to be his wife and his reaction shows that this supposedly moral, religious man is an a*&.  This makes her realize that things are not black and white (my interpretation of her thoughts) and that she can’t live without Mr. Rochester and returns to find him.

Some sad things have happened to Mr. Rochester while she was away, but they also leave him free to marry her.  They are reunited and it is awesome.

And that is my interpretation of this classic early feminist novel by Charlotte Bronte.