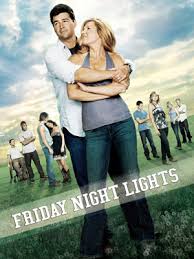 I have been saving the last three episodes of Friday Night Lights on my TiVo because I didn’t want to say goodbye.  Tonight, I watched them all back to back.

Every season is amazing and there is so much heart in every episode.

I want to move in with Coach and Tammy Taylor.  They aren’t perfect (well, Tammy might be), but they are such good people and they have such a great marriage.

Over the past two seasons, Coach Taylor was fired from Dillon, built a football program from nothing on the East side of town, and changed the lives of so many boys.  Tammy was promoted to Principal and then got canned because she supported a young woman who ended up getting an abortion.   Texas…. Don’t worry, Tammy get’s hers!

The both changed the lives of so many kids..inspiring.

At the end of the final season, budgets cuts mean only one football team in Dillon and the horrible Panthers win.  They want Coach Taylor to lead the new super team but Tammy

has a great job opportunity in Philadelphia.  Of course Coach Taylor is a jerk at first (always his initial reaction) but he comes around (as he always does) and they move to Philly! (See I told you she gets hers)

Tim Riggins is finally out of jail (where he was because he took the rap for his brother for some illegal chop shop activities, another really good guy with heart!).  He is a perfect specimen.  Well, he wouldn’t pass my “has to be really smart test”, but in my fantasy world where I hang out with Tim Riggins and Jordan Catalano, it doesn’t matter.  There is not a lot of talking.

It all gets tied up in a nice bow.  East Dillon wins state.  Everyone moves on.  Goodbye Friday Night Lights.  You have officially been added to this recovering TVaholic’s  “Favorite TV Shows of All Time” hall of fame….