I am re-watching My So-Called Life, the fabulous series that lasted only one season in 1994-1995 (starring the equally fabulous Clare Danes, love her.)

I don’t re-watch anything.  There is so much great entertainment, why would I watch anything more than once? Dirty Dancing, Grease, and Titanic are obvious exceptions, and now, so is My So-Called Life.

What did I love about this show that still resonates with me?  Angela is a high school student who observes life analyzes stuff in her head that we can hear (sound familiar?).  She is not popular and not unpopular.  She changes friends as part of growing up (I personally find her new friend Rayanne incredibly annoying but I could relate to the shift which happened to me a few times in high school.) 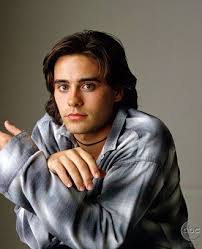 Mostly I could relate to her relationship with Jordon Catalano.  Jordon is hot, but Angela and Jordon have nothing in common.  Jordon does not speak.  Angela likes to believe that Jordon is deep, but there is absolutely no evidence of this.  He is just dreamy. I love watching Jared Leto (aka Jordon Catalano) to this day.

I have dated Jordon Catalano many times.  Number “36” (his football number) in high school was my first Jordon Catalano.  I was obsessed with him.  I made him a pretzel shaped like his football number when I was a cheerleader.  We never officially dated, but if you chase a boy around like a puppy dog long enough, you can get him to make out with you (as proven by both me and Angela).

Even as a grown up I dated my fair share of Jordon Catalanos.  Who remembers the hot personal trainer who was 9 years younger than me, too young to legally drink?  Good times.

Carry on Angela!  I hope you grow out of it before I did, but I thank the Sundance Channel for reuniting me with a version of my high school self again.

Epilogue: For some reason, Jared is going with this look these days, as the front man for “30 Seconds to Mars.” Clearly not because he wants to be taken “more seriously.”  He is a rock star now.  A little farther from my type, but I probably wouldn’t “kick him out of bed for eating crackers” as an old friend used to say.

0 thoughts on “My So-Called Life”