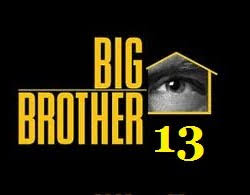 I have not been excited enough about anything recently to blog about it…until now.  Big Brother is back.  I love Big Brother.

I don’t know what it is about this reality show that I love, but we have about two months to thoroughly analyze it.  Let’s begin.

I have watched every season of Big Brother which makes this my 13th season.  By the end of the summer, I feel like these people are my friends.  We hang out together three times a week.  It is crazy to watch them cooped up together, try to entertain themselves, and talk about each other behind their backs (that might be my favorite part.)

I could live without the cheesy competitions, but what the heck else would they do without the crazy back yard antics?  (Right now, they are hanging on large fake Bananas to see who will hang on the longest while getting squirted with chocolate. Good times.)

Every year, I get so excited I think I should definitely apply to be in this show because I am its biggest fan.  Then I remember the many reason why that would be a disaster (starting with the fact that I would probably have a panic attack the minute I walked in the door .)  Although the life inside my head is fascinating, I don’t think I could convince anyone that I am interesting enough to be on a reality show (except maybe my sister.)

I love the twists.  I was there in the beginning when the show itself was a twist, but every year, they bring in something new.  This year, the 8 new house guests (who all seem super cool, perhaps because their intros were less cheesy than in years past) were forced to team up and play as a pair, with a stranger, in their first hour in the house.

THEN they brought back three dynamic duos from past seasons.  Awesome!  Jeff and Jordan who fell in love in the house two years ago.  Super sweet and fun to watch.  Brachel…yuck.  Annoying Brendan and his now fiance Rachel  who also fell in love in the house and are two of the most annoying people on the planet.  (She says things like “No one comes between me and my Banana.” ugh!) And finally, Evil Dick and his daughter Danielle.   Evil Dick is very cool and also a a*&.  He and his daughter are pretending to not be speaking (I think.)   The only thing that would be better is bringing back Dr. Will.   Sadly, no Dr. Will.

Very excited for this season.  Expect to hear a lot about it!!!

0 thoughts on “I Love Big Brother”