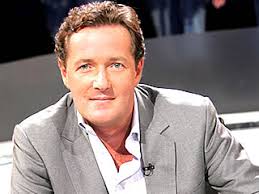 I don’t really understand how it happened. I never watched Larry King Live, ever. I was watching a lot of CNN around the time of Piers’ premiere and it was heavily promoted. I watched the Celebrity Apprentice season he won and I remembered him fondly.

His first guest was Oprah. I am not a big Oprah fan. I know a lot of people worship the ground she walks on, but I find her a little bit full of herself. But I was curious so I tuned in. He actually made me like Oprah a little bit more.

Then I kept watching. I saw him interview Howard Stern and Condoleeza Rice that first week . Loved it. He did a GREAT interview with Ricky Gervais after the Golden Globes. Watched the full shows, end to end. I don’t know what it is about him exactly. He is like the Pillsbury dough boy who likes beer. He is a really nice guy does an interview that keeps my attention for a full hour. I don’t really know how. It’s like magic!

He did get a bit obsessed with Charlie Sheen. I saw him interview Charlie. Fascinating. But then every night it was something else about Charlie. Loved it when the ladies from The Talk were on and they got annoyed when he wanted to keep talking about Charlie Sheen. He even handled that well. Colin Firth (he is a dude), the Facebook twins, the queen of some country in North Africa who looks like she has has a lot of plastic surgery (that is what I took away from that one.)

In an effort to stop watching so much Piers Morgan (because he is not on my Top 10 list!), I changed my season pass to only keep one episode so if I don’t watch one day, the next day will record on top. I have slowed down to just Saturday now, before or after my weekly afternoon nap.

I keep waiting for the day I will pop it on and not be interested in the guest and turn it off. I must admit, when he was covering Egypt I got a little bored. I suck. Stayed tuned in for Hugh Heffner and his fiance, though. Last week I saw Eva Longorria promoting her new cookbook. She is a smart cookie! Getting her masters in Latino Studies. This weekend, saw Demi and Ashton talking about their new charity to put an end to Child Sex Slavery. An excellent cause. Those two are seriously in love and gorgeous!

Maybe the answer is that his cool British accent makes me feel like watching these celebrities on his show is more cerebral than reading US weekly? I must say that I am not a fan of the studio. Kind of reminds me of Paula Abdul’s show (remember that?) I don’t know what it is, but I can’t seem to stop.