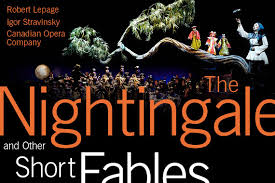 I thought, perhaps, since I have recently become a cultured Shakespeare fan, that I might not hate the opera.  The truth is, I had no idea I had purchased tickets to the opera until the show started this afternoon.

There was a frantic texting session last month with a friend who insisted that we had to get tickets to something at the spring season of the Brooklyn Academy of Music (BAM) before they all sold out.  Someone else suggested The Nightingale, we all agreed to it,  and clearly none of us did our due diligence because we were all equally surprised when people started singing in Russian.   I had recalled that it was a series of fables.

The first fable involved shadow puppets which was kind of cool for about two minutes.  Unfortunately, it went on for about 20 minutes.  I appreciated the artistry of it all….for about two minutes.  The second fable  had no shadow puppets, and that was worse.  The third fable had dancers behind a screen dressed as various animals.   I think they were eating each other.  It was hard to follow because I kept dozing off.

At intermission my friends tricked me.  They were as miserable as I was and made jokes about leaving, but at the last minute decided to sit through the second half.  I could think of about 60 better things I could be doing with my time, so I bolted.

Looking at the web site now from home, it says that the second half is the “pièce de résistance.”   Oh well…I might have missed something fabulous, but I doubt it.  I think Diary of a Mad Man with Geoffrey Rush would have been a better choice.

One thought on “My First (and Probably Last) Opera”