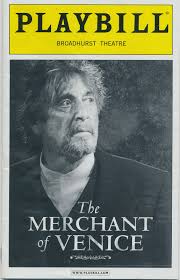 I had my first grown up experience with  Shakespeare this week.  I generally avoid plays with no music and definitely avoid Shakespeare.  I bought the ticket as a favor to my boss who was planning to go with a mutual work friend but had to be out of town.  I was not expecting to enjoy it, but I thought I should give it a try.  Al Pacino was starring.  I figured, at a minimum, it would look cool on Foursquare when I checked in and said I was hanging out with Al.

I had literally no idea what The Merchant of Venice was about.  I was very grateful that the playbill contained a synopsis, which I had to read three times before the show started to fully get the gist of what was coming. (That Shakespeare concocts some complicated stories.)

The first ten minutes were torture.  They used SO MANY words to say everything.  My eyelids were heavy and I thought for sure I would fall asleep.  I thought maybe this would be a good time to meditate.  I figured I had a captive audience since my brain was stuck there for a few hours.

I took some deep breaths and tried to clear my mind.  As soon as I relaxed, and wasn’t trying so hard to understand, it all seemed to make more sense  (and I can confirm that meditating in the middle of a Broadway theater is not really possible.)   The actor’s were amazing so I could pretty much tell what was happening from their expressions and the tone of their voices, and it was in English so I could understand SOME of the words. 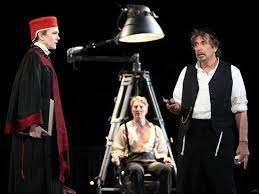 threw me a bit when they referred to boxes as caskets but when the boxes actually appeared, I put two and two together.  They were all a bit dramatic but a pound of flesh and rampant antisemitism is  some serious business.  It is very cool that a woman is the smartest one in the play, even thought she is antisemitic and had to dress up as a man to save the day.

Definitely glad I went and the fact that I actually enjoyed it made me feel very intellectual and grown-up.

And now I’m going to catch up on the Vampire Diaries….

One thought on “TVaholic Takes On Shakespeare”