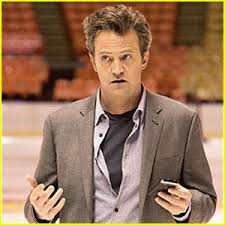 Mr. Sunshine, which premiered last night on ABC (sorry I forgot to give you a heads up) cracked me up.   Matthew Perry’s sarcastic sense of humor is right up my alley.  I loved his last gig, Studio 60 and the Sunset Strip.

Premise: Depressed, 40 year old manager of a sports facility makes sarcastic comments in the midst of chaos and wacky coworkers, including Allison Janey (West Wing) and Hugo from Lost.

Side note: The combo of Matthew Perry and Alison Janey is making me miss Bradley Whitford !!!  I kind of liked Bradley’s recently canceled show The Good Guys, but not enough to have ever mentioned it before or to have watched it past episode 3.

I had grand plans to list some quotes from the Mr. Sunshine pilot, but when I played it back, I realized you have to actually watch it to get it.  For example, I thought it was hilarious when some guy in a mascot tiger costume asks to be unzipped because he dropped a taco in his suit.  Does that sound funny?

It’s very similar to Better Off Ted, which I initially found hilarious as well, but it got annoying fast.

Mr. Sunshine might get old but it made me laugh out loud a couple of times, so I am going to find a place for it on the list.

IN OTHER TV NEWS:

0 thoughts on “Mr. Sunshine is Hillarious”