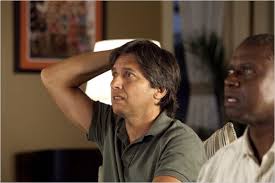 I have been thinking about my TV friend Joe on “Met of a Certain Age.” Joe (aka Ray Romano) has a bit of a gambling problem.  He has been on the wagon for a while, but in the last few episodes of the winter mini-season, Joe started placing what he calls “mind bets.”  He bets himself that he can accomplish something (usually golf related) and punishes himself if he does not achieve the goal (no Laker game, no TV, etc.)

In the last episode of the winter mini-season, Joe, Owen, and Terry (the “men of a certain age”) go to Palm Springs for colonoscopies and golf (hilarious that they make a vacation out of colonoscopies.)  They plan in advance to go to a some awesome steak restaurant post-colonoscopy.  Joe makes a “mind bet” that if he does not score high enough during their golf game, he can’t have the steak dinner.   He doesn’t score high enough so he can’t have the steak dinner.

As a result, Terry and Owen lose their reservation (because they are now two instead of three) and Owen ends up in a bar fight while waiting for a table for two.  They get kicked out of the restaurant and all end up eating tacos at a taco stand. (It is so much funnier than I am telling it.)   This all happened because  Joe refused to let the “mind bet” go (he did realize over tacos that he should head back to Gamblers Anonymous because the mind bets were getting a little out of control.)

Why have I been thinking about this and why am I boring you with it?

Earlier this month, I made the mistake of entering some running goals on the Nike+ website.  I use Nike+ to track my runs, just because I think it is cool.  I wear a little bracelet that talks to a sensor in my shoe to track how far I run.  Then, I plug the bracelet into my computer and upload the run data to the Nike+ website. I can see all of my runs on a graph for the past two years.  This really has no purpose, but I am kind of addicted to it.  I like my gadgets.

Nike+ also has the functionality to enter and track goals.  Earlier this month, I decided to set a goal for myself.  It was totally achievable.  Run 10 times in January for a total of 30 miles.

As the end of the month approached, I became aware that I was behind on my goal and it reminded me of Joe’s mind bets.   I would have had to run many times this week to catch up.  It didn’t happen.

One of my excuses you see to the left.  On Wednesday night, my sister and I consumed some large Margaritas as one last hurrah for Gonzales Y Gonzales, a not-so-fabulous (but festive) Mexican restaurant that is closing its doors this week.   This was my excuse for not running the following day.  A perfectly good excuse.

If I were Joe, there would be some dire consequence for not achieving this goal of running 10 times this month.   I, on the other hand, will just learn from this experience and not set any more goals on the Nike+ website.