What I did not mention yesterday (in my post about getting out and doing scary stuff) was that while I was writing that post, I was supposed to be headed to the airport for a business trip to Istanbul.  Here is why that did not happen.

I woke up yesterday with what felt like, the beginning of a cold.  I had been feeling run down for days and has a very busy week. I am a wimp about being sick, I am a wimp about travel, and there was almost no business reason for me to take this trip.  (It was a boondoggle with a full day of sightseeing planned and only two scheduled meetings. And did I mention it is a 10 hour flight and you have to wear suits to the office there)  I made the mistake of Googling “flying with a cold” and found lots of evidence that supported my desire not make the trip.

I was well aware that my anxiety about going to a new country could have been feeding my symptoms, but the thought of my ear drums exploding on the plane, developing a sinus infection in an emerging country, and potentially spending 5 days holed up at the Istanbul Marriott trying to order chicken soup and orange juice from room service, consumed my brain.  I also thought about all of the things I could do with the two full travel days and jet lag adjustment time I would get back!  (I am the master of excuses) I decided to cancel the trip and stay grounded in NYC.  Then I wrote the hypocritical Fraidy Cat blog post and hoped that I would get really sick to validate my decision.

Imagine my disappointment when I woke up this morning with only mildly annoying sinus symptoms and not a full blown cold.  Of course, things might have been worse if I had hauled myself to the airport and gotten on the plane instead of blogging, and catching up on In Treatment (which was awesome by the way!)  But overall, I felt like I screwed up and failed my first Fraidy Cat test.  I should have just rallied and gone to Istanbul to see the Blue Mosque. 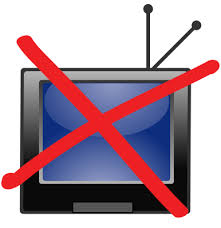 I had a very productive day today, but I am still feeling like I have to turn this lemon in to lemonade.  I had an idea a couple of weeks ago that if I could refrain from watching TV for a WHOLE WEEK, I could get a lot accomplished.  The sheer boredom could drive me to break right out of my shell and do stuff I would not normally do  (or drive me to drink.)

I think the only way to recover from this wimpy decision is to take on the one week television ban THIS WEEK.   This is a particularly bad week since I have nothing on my social calendar (because I was supposed to be in Turkey) and there are some big TV finales this week (The Walking Dead, In Treatment, Boardwalk Empire) but the punishment fits the crime.  I am feeling slightly panicked at the thought of it, but as soon as I hit “Publish,” it is set in stone and I am committed to it.  Sunday – Saturday.  No TV OR MOVIES.  Reading, thinking, exercising,  listening to music or NPR, interacting with other human beings.  (Going out the movies would be OK)

Wish me luck and I will keep you posted!

0 thoughts on “Pulling the Plug”