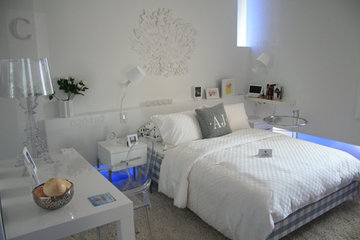 I attended a very NYC event the other night that had a television theme!  Showtime (the television network) hired designers to transform penthouse apartments at a NYC hotel/residence in to rooms inspired by shows on the Showtime network.  My high school friend Stephen K Chung was chosen to design one of the rooms.  Stephen is an architect by trade but also, apparently, a fabulous interior designer!  His design was for the show “The Big C” which I have not seen but is about a woman who is diagnosed with cancer and stars Laura Linney (who was there earlier in the night, but I missed her!).  His gorgeous white room is here on the right (the best room of them all by far!)

Stephen put a lot of thought behind every design element in the room.  For example, not sure if you can tell but the lamps have the illusion of floating in the air.  That represents that state between dream and awake where things are a little fuzzy which happens a lot when you are sick (I am sure I did not explain that right)

The room had some cool technical features designed by MIT students Stephen recruited.

On the right you can see an interactive dress that has sensors you can touch to hear recorded messages from people you love or sounds like birds chirping.   I am not sure why you would want that feature as part of a dress, but art sometimes eludes me.  On the left was my favorite cool thing.  The blocks are magnets that can be moved around the wall and they change colors when you touch them (kind of like playing with souped up refrigerator magnets).  The absolute coolest part is that you can touch one block and hold your finger there and then touch another block which will turn the same color as the one you touched first by sending an electronic current THROUGH YOUR BODY.  I am sure I learned about this in 6th grade and never thought about again until last night.  It blew my mind.  I did also confirm that you can send a current from your finger through the tip of your nose.  Science is very cool.

Nothing really excited me about the other rooms.   I spent some time in the Dexter room of course.  We chatted with the designer’s assistant for a bit.  He was a nice guy and really tried to sell the room.  The designer works for lots of celebrities (including Michael C Hall – Dexter himself who was not there sadly).  I think we finally established that I would not want to live in the same room Dexter would which is a good thing since he is a serial killer (but a really nice one).  This photo gives you a feeling of the Dexter room.

I was out way too late and dragged the next day but it was great to catch up with old friends and take advantage of the unique and cool stuff that happens in NYC!  If you live in NYC you can pay to go visit the Showtime House at Cassa in midtown or if you just want to learn more:  http://www.sho.com/site/showtimehouse/home.do